How I came to jump off the Cape May-Lewes Ferry 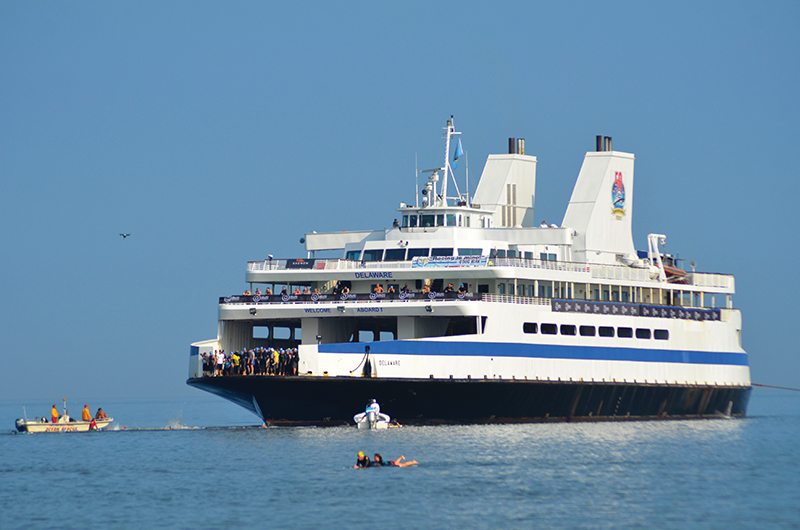 I am a typical 49-year-old man. I have a wife and my two children are in college. I own a business that occupies a lot of my time and energy. A couple of years ago I realized I was carrying more weight than I should. My clothes were tight and I really didn’t have the same energy I used too. I made a lot of excuses to myself as to how I got to this point. I focused on the family and kids. I was dedicated to my business and didn’t have time to go to a gym.

One day I was having lunch with a business associate and he was telling me about his exercise regimen. He was a few years older than me and was talking about retiring someday. He said he worked hard to ensure that his financial position would be healthy enough so he could enjoy his retirement, and he wanted to make sure his body was healthy enough to do all the things he wanted to do as well.

This struck a real chord with me, so the next day I started working on getting in shape. I downloaded calorie-counting apps and bought a fitness tracker. These things helped to track my progress and I started to lose some weight. I then began walking and eventually running, something I always told myself I couldn’t do. Anyway, my plan was working and I lost the extra weight and was exercising regularly, running now up to three miles at a time. But I was just exercising.

In June of that year, my wife’s cousin, Kate, stopped by and told us she had just completed a triathlon in Cape May and had jumped off the Cape May Lewes Ferry. She said the event was so much fun she couldn’t wait to do it again the following year. She acknowledged my getting in shape and said, “You could totally do a triathlon.” She suggested that I sign up for one and offered to do it with me. I felt good about my progress and my slow three-mile runs, but I knew I wasn’t in a position to take on a triathlon. I wasn’t a strong swimmer, I didn’t own a bike, and I’d only been running for six months. She convinced me anyway, and we signed up for the DelMo Sports Wildwood Triathlon in August. I downloaded a newbie training guide and borrowed a bike from my neighbor.

All of a sudden I wasn’t exercising anymore, I was training. The training was fun and generally going well; I followed most of the plan to the letter. The one area that I needed more work on was swimming. Trying to train in my parent’s small pool really wasn’t good enough, but it was all I had at the time. I tried squeezing in a couple of open water swims in the ocean, but I just couldn’t get there very often.

The day of the Wildwood Triathlon came and Kate and I were ready, I thought. I was impressed with the organization of the event and all the support from the Wildwoods. It was great talking to other athletes and seeing the support that goes on at one of these events. The race began with Kate and me running into the Atlantic Ocean and swimming one quarter of a mile, which, on paper anyway, doesn’t seem that far. I got 100 yards into the swim and realized I wasn’t in my parent’s pool anymore. I spent most of my energy just getting out the 100 yards and wasn’t sure I could make it any further, all this while people are swimming all around me and bumping into me.

I lost Kate and started to panic. It was clear that I was doing the first-time triathlon panic swim stroke, because a lifeguard paddled over to me to make sure I was all right. I took the opportunity to grab his board and catch my breath. He offered to paddle me in, but I wasn’t giving up that easily.

After catching my breath I took off again and continued my poor panic swim stroke, all the while cursing Kate and myself. I thought about how ironic it was that all I wanted to do was get in shape for retirement and now I’m going to drown before I can even get there.

The panic stroke worked enough to get me back to the beach. I was never so happy to feel sand. As I headed off to the transition, I swore I would never do another triathlon. The bike and run were great, the crowds cheering as I passed them really got me motivated. I was so pumped up after completing the event that I was committed to nail the swim next time and sign up for another triathlon. As soon as I could I registered for the DelMo Sports 2015 Escape the Cape Triathlon in Cape May.

Escape the Cape is one of only a few races in the country that starts by jumping off a boat.

The fourth annual DelMo Sports Escape the Cape Triathlon has become one of the area’s premier races, attracting 1500 athletes from all over the country to the Cape May area. Many of these athletes and their families will make a weekend out of the event, enjoying all that the Cape May area has to offer. This year, like most, the race sold out early. I made sure I signed up the minute registration opened. After my disastrous swim in the Wildwood triathlon the prior year, I had joined the local YMCA and practiced my swim technique. I was ready to jump off the ferry and conquer my second triathlon.

As I approached the triathlon parking area on the grounds of the Cape May Winery that morning, the sky was already lighting up in the distance with flashes of lightning, and we could hear the thunder rumbling towards us. All of the athletes set up their transition area with their bikes and running gear, and did their best to protect it, as the rain had already started falling. The sky opened up as the athletes were boarding the ferry. Rain, lightning and thunder filled the air. The ferry was loaded and we just sat there watching the storm. There was talk among the athletes that they may have to scrub the swim portion of the triathlon if the storm didn’t let up soon. After a brief delay the boat took off and we headed out to the bay.

The Escape the Cape Triathlon has two distances that athletes can sign up to participate in: the international distance, a one-mile swim, 25-mile bike ride, and a five-mile run; and the shorter sprint distance, .35-mile swim, 12.5-mile bike ride, and 3.1-mile run. As we dropped off the international distance athletes at the one-mile mark, the sky was clearing and it looked like we were in for a beautiful day. It was a lot of fun cheering on the athletes as they jumped off the boat for their one-mile swim. Some jumped right in, and others flipped or cannon-balled off the bow of the boat.

The atmosphere on the boat with all the athletes is really something to experience. Everyone has so much fun, and is so supportive of one another, sharing snacks and giving pep talks to the newbies. When it was our turn to jump from the sprint distance, I was ready. I was looking forward to the jump and starting the race. My jump was exciting and not nearly as scary as I thought it would be. Jumping off a ferry into the bay is really an exciting way to begin a triathlon. You have the beauty of the Delaware Bay and Cape May shoreline, and the thrill of leaping 15 feet off a boat into a large body of water knowing that you have to swim back to shore. The swim was a comfortable one, with the current lending a bit of a hand. My swim was not as fast as some of the better athletes, but it was significant progress for me.

As soon as the athletes get to shore they are immediately met with the cheering of spectators, volunteers and community supporters. Even as a weekend warrior I couldn’t help but feel like an elite athlete running a world-class race because of all the spectators cheering along the way. My transition from the swim to the bike took a little longer than I would have preferred, but getting out of a full wetsuit really takes some practice. The 12.5-mile bike portion of the race took us out of the ferry terminal, right on Lincoln Boulevard to Jonathan Hoffman Road to Seashore Road and over the West Cape May Bridge. On the other side of the canal we traveled through the neighborhoods of New England Road, Bayshore Road, Stimpson Lane and Shunpike Road, then headed back over the bridge and through the North Cape May neighborhoods of Atlantic, Emerson and Beach Drive and back to the terminal. The bike ride is scenic, with challenging turns and the bridge to contend with twice. But this is also where the visiting athletes have some of their best experiences with the people of Cape May and North Cape May. The residents that live along the route could be angry that their roads are partially closed on a Sunday morning, but instead they are lining the streets or sitting in lawn chairs cheering on the athletes with cowbells, banners and pompoms. My ride was one of my best as I fed off the energy of the crowd.

The final leg of the Escape the Cape triathlon is a 3.1-mile run up Beach Drive and back, with a couple of detours onto the beach in heavy sand for a few blocks. Like the bike ride, the streets are lined with spectators, residents and volunteers cheering you on. Some local residents even sprayed down athletes as they passed with their garden hoses, giving them some welcome relief from the hot, grueling run.

The triathlon’s end has all the feel of an elite event, with a big finish line filled with spectators cheering as your name is announced. As I approached the finish line, I saw my wife and daughter screaming and cheering. When you cross the finish line, the wonderful DelMo Sports volunteers are there to greet everyone like they just won the race, handing over water and a medal.

I am already looking forward to next year’s Escape the Cape Triathlon. It’s a really well-organized and fun event.

I highly recommend signing up to race. Any race will get you started and will give your exercise regime some new purpose. But do yourself a favor and make sure you take advantage of one of the great DelMo Sports events in Southern New Jersey.

This experience was very rewarding for me and I’d like to thank DelMo Sports and their army of volunteers for organizing such an amazing event. And thanks to the Delaware River and Bay Authority for hosting it and letting us jump off your boat, as well as the local governments and people of Cape May and North Cape May for their support. Thanks to my wife for letting me buy all the cool triathlon gear (another great reason to start doing triathlons!).

And to Kate, for convincing me that I “could totally do a triathlon.”

Get a year (6 issues) of Cape May Magazine for $29. Subscribe online

Come Sit for a Spell

It’s a Zoo Out There